This young Moose (Alces alces) female is wandering around in the area, mostly trimming the wild tree buds – but occasionally also helping herself to some of the more exotic and delicious shrubs in the gardens around here. And she isn’t very much afraid. In fact, one of the neighbors came driving home today, but she wouldn’t move, so he had to park down by the road and take a detour to get up to his house. The other neighbor wanted to take a close up, and walked near enough for her to raise her leg in warning that he was close enough. One shouldn’t be afraid of these animals – but they demand to be respected and kept at a distance. A kick from the fore legs can easily be deadly. Usually they don’t attack, unless you startle them, come between a cow and her calves or are perceived as a challenge from one of the bulls during mating season.

Their fantastic ability to digest cellulose through an intricate system of bowl enzymes has been studied so that the same enzymes could be used to produce sustainable biofuels from wood.

In for landing in the Coconut

One of my mother’s little friend – a Great Tit (Parus major) – coming in for landing in the hollow coconut used as a feeding station.

In for landing in the coconut

It’s like the Gobi Dessert – only a bit smaller

In the otherwise green northern parts of Denmark, sand is moving right across the country in the general direction of the wind from West to East. This flying sand is moving like a dessert, although the sand is quite moist. The moving sand has throughout history buried houses, farms, roads and churches and only after many years when the sand has passed the area, these abandoned farming community appears on the back side of this moving dessert. However, the sand erodes the fertile top soil and carries it away with the wind leaving barron marshes in it’s wake.

I shot this photo in a particular area called Raabjerg Mile (Råbjerg Mile).

Raabjerg Mile - Tuesday February 7. The lake in front is frosen.

The SOPA and PIPA law proposals are postponed indefinately! Which means the World’s Population – not the Entertainment Industry – still has the democratic control over the internet! (For now)

So in order to join in the free expression of the world this entire blog is free under a CC – Creative Commons License – with the following limitations:

Commercial Use: NO (right back at you, greedy entertainement industry) Not without my written permission.

Share alike/alter the work: Yes, you may alter and share my pictures, videos or texts from this blog, as long as you link back to the blog. But still, if for commercial use, you need my written permission.

This license applies to The Whole World!

My mother sees to the little airborne friends during the winter. They are having an absolute fiest on all the delicious food she is serving them.

Although lighting conditions were poor today, I managed to get a couple of shots of a Great Tit (Norwegian: Kjøttmeis, latin: Parus major) 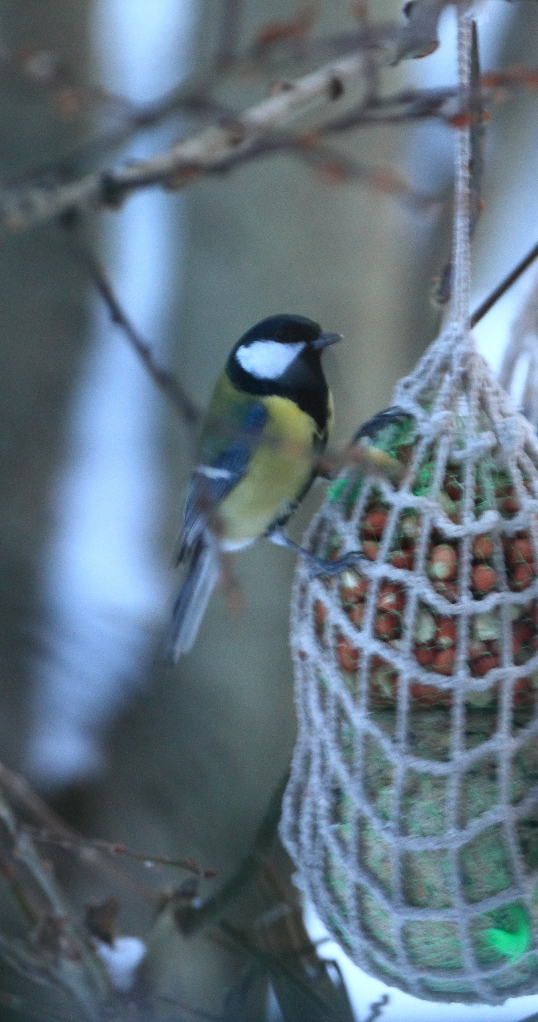 I love making HDR-photos, and play around with it a lot. Yesterday I took some photos in Aarhus. One of the scenes I captured was a flock of geese crossing the autumn sky. Naturally I made three rapid exposures and hoped to turn it into an HDR-photo. So I processed the images. This resulting HDR-photo consists of three images. Each image is taken 12-13 milliseconds apart. That – of course – is a problem when merging a motive that is moving rapidly across the frame. So the HDR-software has a built in function to remove “ghosting”. But that method isn’t fool proof, and so this shot resulted in a funny ghost, one single white bird following the rest.

The black “beard” you see hanging from the branches of this birch has got really nothing to do with Treebeard – the ent – from Tolkien’s “Lord of The Rings”. It is called “treskjegg” in Norwegian – directly translated: “Treebeard”. It is actually one of extremely many species of Lichen (pronounced “lai-kenn”. Lichens are actually a symbiotic organism that consists of fungi and algae. The fungi provides proteines, salts and shelter. The sheltering structures contains, in addition to the fungus cells, algae-cells. The algae has chlorophyll and thus it produces sugar which it feeds to the fungus. A tiny ecological system in it self.

My friend Gunnar has studied lichens for a long time for The University of Tromsoe. Lichens are very sensitive to the environment and mapping lichens in a specific area, species, how much there is of the various species etc., is a very precise indicator of environmental changes; climate, acidity and pollutants. Any change in these paramaeteres can quite quickly be registered in the compositions of lichens, and thus has become a very interesting field in Biology and Ecology.

Treskjegg - "treebeard" - hanging from a birch. This is actually a lichen - a symbiosis between a mycobiont and a photobiont. In the background The Fagernes Mountain bath in sunlight from the setting sun.

The Season of The Carotenoids

Why do the leafs on trees become yellow, orange and red in the autumn? Well, the answer is, they have these colours in the spring and summer as well. But then it is not visible because of the strong green colour reflected by chlorophyll. The colours we see are actually the colours that the tree doesn’t use in the production of sugar through photosynthesis. These colours are reflected and the light that is actually used in the photosynthesis is absorbed.

The red, orange and yellow colours we see in the leafs in the autumn is the reflection of light from carotenoids. These substances are cheap for the trees to produce, and the trees can afford to shed these. The chlorophyll on the other hand is a very precious and valuable molecule for the trees, so these are transported to the roots in the autumn leaving the carotenoids to “light up the forests in the beautiful, warm colours. Next spring the trees formes new leafs and pumps chlorophyll back into the freshly formed leafs.

Common Aspen - Populus tremula (local dialect: Osp) - has stored it's chlorophyll for the winter. This photo was shot today.